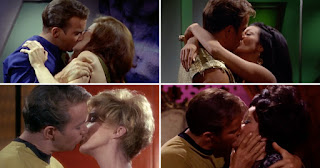 I've been watching Star Trek: The Original Series lately. Captain Kirk is often described as a "ladies' man," the implication being that he chases after the ladies.

In Star Trek: The Undiscovered Country, Bones hisses at Jim, "What is it with you?" when yet another female creeps into his bed.

But the contemporary interpretation--and the constant use of "misogynistic" and "leering" in even friendly reviews of TOS--miss the point. Kirk actually doesn't do that much chasing. They chase him. 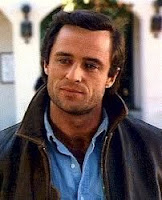 The idea--which is reflected in other shows of the time period, such as Jake & the Fatman--is that Kirk is so tough and virile and handsome (William Shatner does have possibly the sexiest eyes in existence), beautiful women who know their own minds will flock to him naturally.

It is, granted, a somewhat eye-rolling concept at this distance--although it does credit the women of that time period with more moxie than their supposed defenders now appreciate--hence Bones's sarcastic comment.

But it honestly isn't all that different from the supposed allure of the main characters in Outlander.

Or the entirely unanticipated fascination by female viewers with Spock.

Or the charisma of Gibbs. The difference between Gibbs/Spock and Kirk: Gibbs/Spock doesn't brag about it--or even appear to notice. That appears to be the key to creating a character of this type without the character being anathematized:

Be sexy BUT QUIET.
Posted by Katherine Woodbury at 8:00 AM