The best manga short story combination is an interesting premise and an actual arc supported by imagery. Like a good picture book (I'm the kind of reader who sees nothing "childish" about reading good picture books: see panel), a good manga story will rely on clever pictures to tell the story as much as on text. The arc is there--so long as the reader remembers to look beyond the dialog.

One of the best examples of a good manga short story relying on images as much as on text to convey the arc is the short extra at the end of Finder 3.

Akihito and his friends get together at his aunt's on New Year's. Over the course of the evening, as Akihito gets progressively drunk, he makes a series of phone calls to Asami, his sometime lover/nemesis/Yakuza (maybe) acquaintance. The phone calls begin before midnight and continue until the early morning when Asami comes to pick Akihito up.

There's no obvious arc in the sense that there's an acknowledged change in the characters' relationship. Yet the events are not static either. Over the course of the evening/morning, Asami--who has been asleep--proceeds to get up, shower, dress, and read a paper while waiting by the phone. He engages in no discussion--he doesn't say to anyone, for example, "I'm worried about my sometime lover/photography friend who is frankly something of a handful"--but the visual evidence for his decision is there. 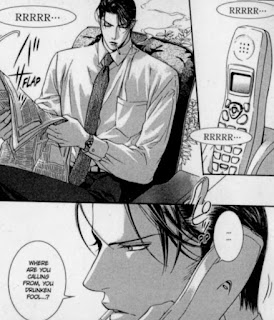 The visual evidence is how we learn what we need to know. I am continually surprised when movie watchers or manga readers present interpretations based exclusively on dialog, arguing that what someone says carries more weight than that character's expression, attitude, or even actions!

It's a bizarre reliance on literalism (one question: one answer) regarding two mediums that are entirely dependent on "show, don't tell." In a good manga story--whatever its length--the "truth" will be conveyed as much through the images as through the dialog.

Unfortunately, sometimes, there isn't enough of either (visual or dialog) to sell the reader on the "truth." A captivating premise is a good place to start, not to end.
Posted by Katherine Woodbury at 8:01 PM