Interview with a Translator, Part I

Translators, like editors, fulfill a hidden yet extremely important role in the world of written communication.

Below is Part I of my interview with Eugene Woodbury, a translator of Japanese to English works as well as a guru on what goes into making a translation work.

A list of Eugene’s translated works can be found on his website. He has received praise from reviewers for his professional translations: “Superb translation. The language is smooth, artful and draws you right into the story." He is currently most invested in his translation of the Twelve Kingdoms, a fantasy novel series.

Kate: Among current translators, some learned Japanese from their cradle but surprisingly more didn't encounter it until college while still others encountered it first and foremost through popular culture. You began to study Japanese when you reached college age. How difficult did you find it? In what ways is Japanese harder or easier than English?


Eugene: Japanese and English are similar in that they're both a pack rat's collection of widely different language systems: Chinese and the utterly dissimilar Altaic languages in the former; the Germanic and Romance languages in the latter. Japanese grammar is more logical than English grammar (plus no gender), and the phonology is close to Spanish (it's not tonal like Chinese).

Perhaps the most difficult thing about Japanese is that it's perfectly acceptable to drop the subject of a sentence. An unclear antecedent is indicative of bad writing in English. It's par for the course in Japanese. Well, those antecedents aren't always unclear, but they rely on subtle sociolinguistic clues such as who is using what honorifics and who is using what pronoun to address whom.

A common narrative trick in Japanese crime and suspense novels is to write an entire paragraph (or whole page) in the third person without revealing the sex of the character. Try doing that in English. It's easy in Japanese. And grammatical.

There have been times where I've had to stop and go back to the last dialogue tag and count paragraphs to figure out who's speaking. Or simply read the passage over and over, faster and faster, until the brain's language centers could buffer the grammatical antecedents long enough to figure out what was going on. (This "leaky bucket" approach does work.)

Kate: What should students of Japanese expect?


Eugene: Japanese intimidates people because of the writing system. The tendency of some well-intentioned teachers to exaggerate the difficulty of learning kanji doesn't help. The kana can be learned in an hour or two. Really. The kanji are no less rational than English spelling (which isn't as irrational as people think). I recommend James Heisig's philosophy (not necessary his exact approach).

If you're willing to immerse yourself in a language, you can master it. If you wanted to become a professional golfer, playing a lot of golf would be the obvious prerequisite, not only reading books about golf or taking lessons. That "10,000 hours" thing is a good rule of thumb. Several hours a day adds up to ten years. The younger you start, the fewer total hours you'll need.

Kate: How proficient do you consider yourself?


Eugene: Unfortunately, the decade after I graduated from college, I was "around" Japanese but didn't "practice" it much. I only started studying seriously when I was on a Microsoft project that was transitioning technical support to India. I had time on my hands (see below) and the tools were available. This was fifteen years ago or so. Windows 2000 and Windows XP had just debuted and had full Unicode support and Microsoft's fantastic IME. Incredibly useful reference websites like Eijirou and WWWJDIC were coming online too. And JWPce became my most-used Windows app.

Kate: How did you get into translating? 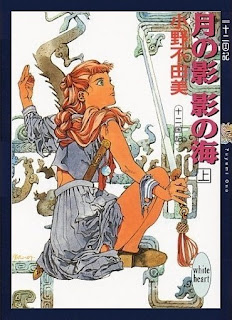 Eugene: The last year or so of the [Microsoft] project, the Utah team only existed as a backup if the India site went down, so we had a lot of time on our hands. Management didn't care what we did as long as it was legal and we didn't bog down the network playing games or watching videos. That's when I started working on my Twelve Kingdoms translations, a dive-into-the-deep end approach.

At the same time, I was teaching myself HTML and set up a website. I posted a couple of chapters of Shadow of the Moon (more as an experiment) and then got distracted by other things. Not long after that I started getting emails asking when I was going to post the rest.

Quite unexpectedly realizing I had an audience, I kept on going. After the Microsoft project ended, I tried my hand at free-lancing, and made a go of it for about seven years. But I was pretty much in perpetual starving artist mode.

I'm the PGA golfer who realizes he's never going to rank above 70 and figures he might as well save it up for the senior tour. And get a "real" job. Number 70 on the PGA tour makes $12,000 a year. It's a move up or move out kind of thing. If I knew then what I knew now, well, things might have been different. I started ten years too late. So I've shifted it from vocation to avocation.

And that's all good too. As the Japanese like to say, "Shikata ga nai."