High Romance in Manga and Everywhere Else 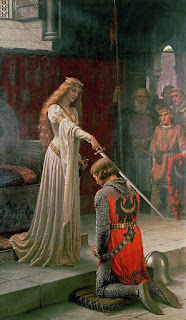 High romance evokes an image of King Arthur's court: a valorous knight spots a beautiful, aristocratic woman from afar; he undergoes an epiphany of love which is as much spiritual as it is emotional. The love may remain unconsummated--whether it does or not, the relationship revolves around certain features: (1) veneration/adoration (the beloved on a pedestal); (2) a backdrop of war and/or courts (no local shopping trips!); (3) poetry and/or song that idolizes the object of veneration.

Naturally, the reality of knights and ladies fell far short of the idealization--as Malory's Morte D'Arthur points out (Lancelot and Guinevere's high romance destroys a nation).

Generally speaking, I prefer my romance to be bourgeoisie, ordinary, everyday, common--the opposite of high romance. My favorite contemporary manga is Apple & Honey: His Rose-Colored Life by Hideyoshi in which ordinary college students deal with a relationship that involves nothing more dramatic than eating curry and deciding what to tell their friends about their relationship--

--which is, of course, wholly dramatic to the people involved. Just not to anyone else.

All in all, I prefer finding the magic in small moments than in large, momentous, seminal ones.

Occasionally, however, I encounter high romance that I enjoy: Last of the Mohicans (the movie), War & Peace (okay, I admit, I never finished the book, but I saw the movies and admire the entire concept), Hamlet . . .

Blue Sheep Reverie is sci-fi meets yazuka meets Hamlet. In a futuristic society, gangs control cities. The head of Sarte, Steel Lahti, takes a lover, Kai, who becomes willingly embroiled in a world that includes stand-offs, kidnappings, estranged assassin sisters, and jealous subordinates. Basically, it's the story of Hamlet told from the point of view of Horatio (and this city's Hamlet is a tad more proactive).

Innocent Bird is a devil-meets-angel tale chock-full of religious iconography. As some reviewers on Amazon discuss, the series incorporates nearly every trope present in such fantasy: think Supernatural meets Buffy meets Descendants of Darkness.

Yet Innocent Bird has the capacity to surprise--and ends on a high note of sacrifice and redemption.

In one of the most passionate moments in the manga, Klaus and Taki prepare to deploy on a mission from which, like with many of their missions, they may never return. Taki is in the unit division's tank; Klaus on his motorcycle. As they head out, Klaus trails his fingers along the tank's side. It is the ultimate warrior's gesture of allegiance and tender yearning: the essence of high romance.

High romance is amazing stuff--like any rich fare, a little bit can satiate the reader for a long time. 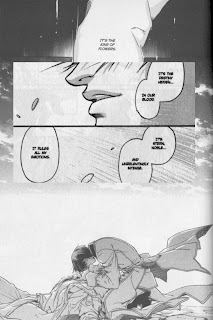