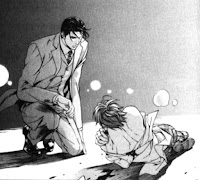 I have to take issue with an answer by Justin Servakis.

In answer to the question, "Why do so many male characters with male lovers in yaoi claim to be straight?" he summarizes several possibilities, including the following:


One of the prevailing theories is that it's a safe way for women to think about love and sex without having to deal with any of the baggage that can happen with a heterosexual arrangement -- making yourself vulnerable to a guy can be kind of scary to women, after all. To go with that theory, the fantasy of a straight guy ending up making himself vulnerable to another guy is the ultimate in approachability for a female viewer: still potentially interested in someone like them, but having this dalliance with another guy right now and therefore the reader is not on the radar [my emphasis].

I think there is some truth to the first part of this theory--after all, readers certainly imagine themselves into all kinds of narratives as "hey, what if this were me?" propositions. It would be pointless for me to argue otherwise.

What bothers me is the embedded condescension, a common occurrence when any group of people start pontificating about so-called "women's" fiction. A man can "find himself" in a story and all that happens to him is that he goes on Charlie Rose, stares at his naval, and pontificates about his inward journey. No one assumes that his subjective response is the result of wish-fulfillment but rather that his deep philosophical insights regarding his subjective response give him some kind of right to preachify about economics or politics.

Again, women get an especially hard time here--sure, some women read Pride & Prejudice because they imagine themselves as Elizabeth, the object of Darcy's affection (and there's nothing wrong with that--as I'll discuss in a later post). The problem with assuming that women read romance primarily for the sake of wish-fulfillment is (1) it falls into the "knee-jerk response" category of theorists' pontifications; (2) it is usually occupied by either a guffaw (oooh, you know women!) or a pat-on-the-back (pathetic women need some release from their patriarchal-ridden lives).

In a later post, I will question whether wish-fulfillment is such a silly, stupid thing. In terms of this post, I specifically question the idea that women read yaoi because the straight guy in yaoi is still potentially interested in someone like [them] but [is] having this dalliance with another guy right now.

To believe that is to utterly undermine the basic premise of all yaoi, a great deal of shojo, a wide swath of Japanese literature, not to mention much of the great literature of several continents stretching back thousands of years.

The basic premise of yaoi (with a few exceptions) is NOT that the straight guy is experimenting with a guy and will eventually go back to being straight. The basic premise is that everyone has a one and only and recognizing that one and only transcends everything from orientation and gender to age and occasionally, in Japanese manga at least, blood relations.

It's the type of idea that one debates as a teen, apparently grows out of it, yet still secretly yearns for--and if you doubt me, try reading, oh, anything, from the Medieval era. Or Ancient Greece. Or Ancient Egypt.  Or, for that matter, the Bible.

Setting aside the nuttiness of anyone actually wanting to be in a relationship with Asami (see first panel), to assume that any man, woman, or pet could replace Asami or Akihito in their fated relationship misses the point. The point: He came for him! The satisfying pay-off of Asami rescuing Akihito (who was on his way to rescuing himself) is not honestly all that different from the Powell-McClane scene at the end of Die Hard. And sure, we all want someone to come for us--that doesn't mean we want to mess up THIS relationship. (After all, if the relationship got messed up by a third party, it would cease to be the relationship that attracts us readers in the first place.)

The existence of the one-and-only can be serious, touching, highly romantic, sweet, or downright silly. There's a hilarious scene in Kubaki by Yukari Hashida in which the main character, who promised to love his vassal in the next life, returns to the next life as a teen who believes, temporarily, that his vassal has returned as, for lack of a better phrase, an "old fart." He is not entirely sure if he can overcome his reservations. Luckily for the story, his vassal shows up as a college-age young man who has not changed substantially in looks or personality.

The one-and-only is so powerful, in part, because it changes the focus of the plot from "Will they get together?" to "How will they work out their relationship?" Even in manga such as What Did You Eat Yesterday?--the most contemporary and realistic of the manga I read and one in which both characters are frankly gay--the characters' relationship is a "given." Yaoi is not "revolving door" romance (think Ross & Rachel from Friends) in which the characters date, cheat, get together, oops, nope, break up again.  Yaoi is about being together.

I suggest that being together is the reason that yaoi readership has not apparently diminished all that much in the 21st century, even as its characters are increasingly being identified as simply bi or gay without any qualification. Women like to read about relationships working. They also like to believe in the security of a one-and-only.

A lot of guys do too. Only it's not as cool for a guy to admit it.
Posted by Katherine Woodbury at 8:00 AM