Yup, it was on Andy Griffith.

Okay, I don't know that for sure. My knowledge of classic sitcoms, begins with Andy Giffith and ends with WKRP in Cincinnati before moving on to Tim Allen. 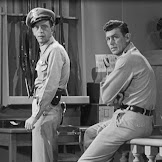 But Season 2 of Andy Griffith presents a delightful episode in which Barney and Andy deal with Opie being bullied. It is resolved with a trope that has since fallen somewhat out of style: Opie learns to stand up for himself when his father doesn't intervene to stop a fight. Rather, Andy encourages Opie to defend himself physically (even Num3rs presented this trope in a positive light; Ryan from Last Man Standing, of course, would totally object).

The problem is handled by Andy and discussed with Barney. They function as dual parents throughout the episode, even to the point where Andy questions his own advice in front of Barney. Barney is concerned, supportive, and less bombastic than usual. At one point, Andy warns him not to go off and interfere (attempt to helicopter parent).

The entire episode is helped by the (seemingly platonic) vibe between Griffith and Notts. Chemistry helps, whatever the message.

In a later episode, Andy and Barney join Opie's club, just as good dads would! 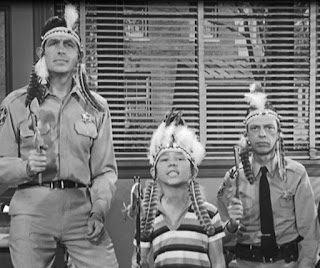