Interview with a Translator, Part III

Part III of an Interview with a Translator focuses on the history and culture behind creating comprehensible yet faithful translations.

Kate: For your Twelve Kingdom translations, you supply many historical notes. Do you do this research while translating or is it information with which you were already familiar from other research?


Eugene: The Twelve Kingdoms takes place in an alternate universal that is parallel to China and Japan, with China being the bigger influence. As a result, Fuyumi Ono uses medieval Chinese terminology throughout, which sent me to unabridged Japanese dictionaries and Wikipedia.

Often this meant, for example, reading a description of a Chinese castle in a Japanese dictionary and then looking up articles about medieval European castles to figure out how best to translate a word.

Here are two examples of starting with a medieval Chinese term and finding an English equivalent based on medieval European military history: Part 17-12 of Kingdoms and Part 19-12 of Kingdoms

Another early challenge was deciding how to handle terms describing the political divisions of the kingdoms. I looked at the nomenclature used in English translations of Chinese history books and tried to come up with a consistent set of rules. Consistency can matter more than specific accuracy.

Between the lines there's also a good deal of political commentary, couched as criticisms of Qin Dynasty-style legalism. So I spent some time researching that too.

Kate: You lived for several years in Japan, once from ages 19 to 21 and once when you were older. Have you found that experience helpful to you when doing translations? In what way (if so)?


Eugene: A critical part of language acquisition is the accumulated exposure to unfiltered input. Living in the country, you're surrounded by the language. You see how things work close up, get a sensory feel for how the gears are turning, how the abstractions of language interact with physical reality. However you may feel it doesn't make any sense, it sure does to 127 million Japanese.

I often discuss on my blog the extent to which religion is an integral part of everyday life in Japan. It is rarely as overt as it is in U.S. political campaigns (even the Komeito party downplays its ties to Soka Gakkai in public). But it is inseparable from everyday life in Japan. Get outside the commercial core of a big city and you can't walk 100 yards without running into a shrine or temple or a little altar by the side of the road. What you rarely see in public in Japan (aside from the far-right nationalists) are the noisy evangelical movements common in the U.S.

Japan's most evangelical home-grown religion, Soka Gakkai, claims about 10 million members in Japan, a quarter of which are "active." By comparison, Catholic membership is five percent of that and Mormon membership is one percent of that. Harmful fringe cults still figure into the mix, but they generally try to keep under the radar (except when they go apocalyptic like Aum Shinrikyo).

Observing first-hand how religion "works" in Japan and how it "works" in the U.S. makes clear the deep differences in the culture despite how similar things can appear on the surface. Most Japanese claim to be irreligious. And yet religion governs their lives. The opposite is true in the U.S.

Kate: Regarding fantasy and science-fiction, what cultural issues/assumptions (Japanese sci-fi versus American sci-fi) come into play?


Eugene: Since so much manga and anime takes place among the teen demographic, you can never get away from the social dynamics of the high school hierarchy. That sense of the group and the collective identity affects every aspect of their lives for the rest of their lives.

From this springs a great deal of fascination with conspiracy as a plot device, and at the same time, a great deal of nonchalance about it. Call it "X-Files sociology." It evolved out of a real school of political philosophy called "Nihonjinron." It took off during the 1970s and 1980 but subsided as Japan fortunes waned with the bursting of the economic bubble in the 1990s. 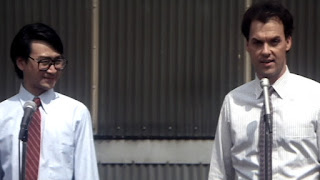 Pop culture "Nihonjinron" influences during the rah-rah 1980s--depicted in Hollywood movies such as Rising Sun, Ridley Scott's Black Rain, and even Gung Ho (a Japanese firm buys an American car company run by Michael Keaton)--in no small part reflected "Japan as #1" attitudes. It's a fair argument that Japanese writers simply latched onto Sean Connery's James Bond in You Only Live Twice (1967) and returned the favor. This certainly seems the case in the 009-1 series, replete with retro Cold War politics. Call it "Japanese exceptionalism."

These days, the "Nihonjinron" philosophy has largely faded from the scene. It now manifests itself between the lines in plots that posit that we keep screwing ourselves over because we're so blasted brilliant. These stories are closely linked to the post-apocalyptic conspiracy genre. Two examples are Vexille and Appleseed. Vexille explicitly refers to Japan, while Appleseed is more pan-nationalistic, but they both play off the everything's-a-conspiracy and flew-too-close-to-the-sun themes.

Kate: How about horror and/or ghost stories? What differing assumptions show up there (if any)?


Eugene: Japanese are no less superstitious than anybody else. And in many respects, more so. A lot more so.

It's common in police procedurals for cops to do the Buddhist equivalent of crossing themselves when they encounter a dead body. Haunted houses are as big in Japan as in the U.S. Omamori are ubiquitous. And somebody dying in an apartment is considered a curse.

I would say that several key concepts differentiate the horror genre from its Western counterparts: the lack of a fixed boundary between the mortal and the immortal, the sheer expanse of the transcendental, and reincarnation.

Hollywood makes shows about people who can see dead people. But as in Spirited Away, Shinto supplies a spirit world of almost infinite expanse and variety. Practically anybody and any thing can become a god or demon tomorrow.

There is also infinite variety in the moral nature of these transcendental beings. And in their job descriptions. Not every god or spirit world warrior needs to be constantly engaged with damnation or salvation or with a looming apocalypse. Not every horror is horrible. A lot of the time, the problem is simply insuring that the spirits and demons stick to their own lanes, stay under the speed limit, get to where they are supposed to be going.

In [U.S. television shows] Ghost Whisperer and Saving Hope, the dead go--somewhere. To heaven, presumably. Reincarnation, on the other hand, doesn't leave the eschatology up in the air. As in Angel Beats, the question becomes how you will be reincarnated, not whether you'll end up in an ill-defined "heaven."

But even when you're not getting reincarnated, the Buddhist and Shinto spirit worlds are more "concrete," perhaps closer to Greco-Roman concepts of the divine, where the mortal and immortal worlds intermingle and reflect each other in recognizable ways.

It's ironic that "Eastern religions" are stereotypically depicted as naval-gazingly "metaphysical," yet the Buddhist hell (naraka) out-Dantes Dante and reincarnation is plainly materialistic and comprehensible in its outcome.

So even though most Japanese don't consider themselves "religious" (in the "Christian conservative" sense), when push comes to shove, they're more than willing to make Pascal's Wager. Being superstitious is simply a way of hedging one's bets. On that subject, Justin Sevakis makes a very good point:


Every culture has its superstitions, and some are more widely believed than others. And since Asian cultures don't put much value in flaunting your beliefs publicly or confronting the beliefs of others, they do tend to take root a little more over there.

Plus, people tending not to walk around with religious chips on their shoulders gives popular culture more latitude to play with the types and tropes.

Kate: Do you think that translators have to be aware of these changing/differing assumptions or do you think Jung wins out in the end? That is, does it help if a translator understands variations in pop culture? Or can concepts like post-apocalyptic conspiracies and ghost stories be handled from the "Hey, everybody gets paranoid and wonders about death!" standpoint?


Eugene: It's a paradox: the universality of story always triumphs, but you can't divorce the original context from the source culture. Hence, The Seven Samurai and The Magnificent Seven share the same story, but the contrasting cultural reference points produce two unique works.

If the former (an aspect of the zeitgeist critical to the story in terms of substance), it has to be made comprehensible to the audience. The challenge then becomes to avoid bogging down readability by littering the text with additional exposition or footnotes (one nice thing about posting online).

If the latter (an aspect of the zeitgeist that's in the story because the allusion was available to be plucked out of the air), then it's the topicality and internal textual consistency that matters; the actual reference point is probably ephemeral and less important.

(Similarly, it is interesting--and revealing of our evolving biases and mores--to observe what ages well and what doesn't when watching old television shows.)

The translation of Harry Potter addresses such issues.

No matter what, the demands of storytelling must always win out.

For more of Eugene's thoughts on the supernatural in Japan, check out these posts:

Part IV of Interview with a Translator coming next . . .
Posted by Katherine Woodbury at 8:00 AM